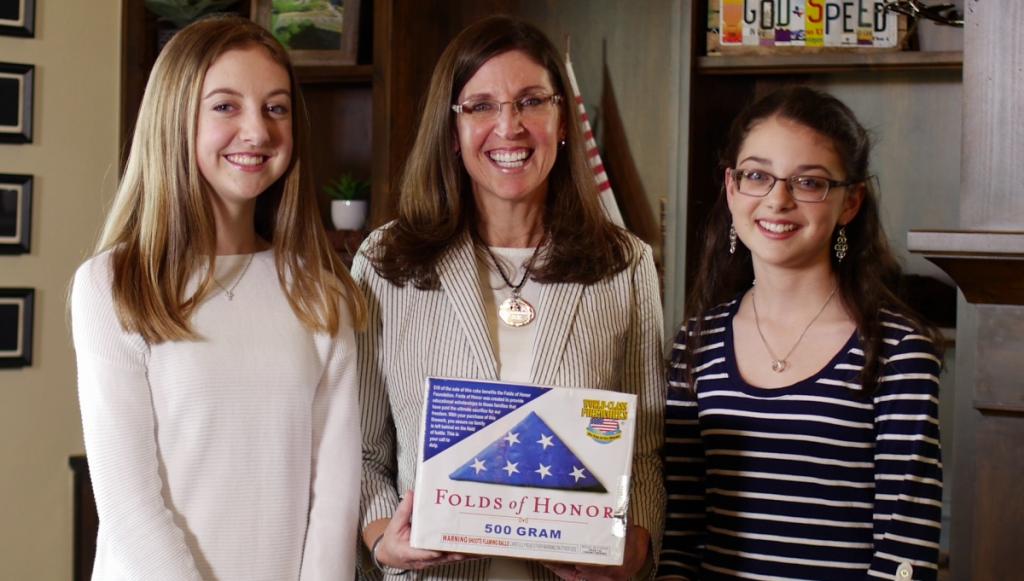 Honoring Soldiers and Their Families with Folds Of Honor

"When you go home, tell them of us and say

For their tomorrow, we gave our today."

Sacrifice is a word military families know in the strongest sense possible. Every relative and friend of a service member, and the service members themselves, understand this word in a way that is hard to explain. Their sacrifice changes the lives of families, of futures, and of outcomes much bigger than a single individual. And they are final, no matter the outcome. When service members are away from their families, they sacrifice time, health, peace of mind, and a feeling of safety. All because what is worth the sacrifice is bigger than themselves.

This sacrifice makes the moments a service member shares with his family and friends more precious. You laugh harder while wrestling with your children. You watch a school theater play more closely, eat a family dinner more slowly, look into their faces depply. Because, you don’t know when you will again. You live in the now. And, when you sacrifice your today, you do it so those moments can continue, whether you see them or not.

Every one of these service members and families has a name, a life, and a story. Today, we honor a soldier who sacrificed his life exactly nine years ago, and his family: Major Larry Bauguess, his wife Wesley, and their daughters Ryann and Ellie.

Major Larry Bauguess of Moravian Falls, North Carolina, served as a battalion operations officer in the 82nd Airborne Division in 2007. While deployed in Afghanistan, his family continued to live in North Carolina, with Wesley (previously an officer in the U.S. Army) raising their 4- and 6-year old daughters. Wesley fondly remembers the special relationship Major Bauguess had with his girls: “When he was home with them, he would always get down on his knees so he could look at them at their level and wrestle with them. He was just that kind of dad.”

On May 14, 2007, Major Bauguess participated in a peace meeting in the town of Teri Mengel, Pakistan, between U.S., Afghani and Pakistani forces. The meeting, which was an attempt to settle a border dispute, was successful by all accounts; “At the end of the meeting, they were shaking hands, exchanging coins, and taking pictures,” Wesley recalls. As Bauguess and his men were boarding their vehicles, a uniformed Pakistani Frontier Guardsman opened fire at close range. “Larry recognized the danger, and he put himself between the gunman and his men. He gave his life to protect his men.” Bauguess received, among many awards and commendations, the Bronze Star and the Purple Heart.

In 2009, the Bauguess family was introduced to the Folds of Honor Foundation, an organization committed to honoring the sacrifice of America’s fallen and disabled service members by providing educational support to their children and spouses. Ryann and Ellie were later presented with Future Use Scholarships to be used toward their educations.

Wesley understands the importance of these scholarships. “We both went to college. We both saw how important that is, and we want that for our girls,” she explained. Folds of Honor’s dedication to remembering Major Bauguess has impacted his family both in the future, and in the present: “They get the concept of ‘be here now,’ because they are doing what they do, providing the funding to help educate these kids…The fact that an organization is willing to be there, to not only remember Larry and remember his sacrifice, but step in and be there for his kids is a priceless gift," elaborated Wesley.

Major Bauguess sacrificed his today for his family’s tomorrow, and as Wesley closes, "Larry expects us to carry on and remain committed and that's what we're going to do."